It’s time for SSC to steal the show! The SSC CGL Tier III Exam 2016-17 admit cards are officially out now and candidates can check the admit cards on the official website i.e. ssc.nic.in

The Staff Selection Commission (SSC) is a govt. organization which works under government of India to filter out candidates and select them for posts in various ministries, departments and subordinate offices.

Do you have an idea of what number of candidates might have qualified for SSC CGL Tier III? Well, the number is huge indeed! A strength of 56169 candidates have managed to get into Tier III examination. Moreover, the admit cards have been released for various regions.

For latest updates, we recommend the candidates to keep an eye on the official website of SSC CGL. Moreover, we will bring you latest updates on SSC CGL Tier 3 2016-17 Admit Card. Best of luck! 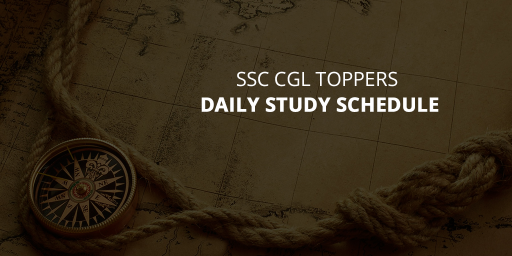 SSC CGL is one of the most reputed exams conducted by the Staff Selection Commission of India. SSC CGL is a Combined Graduate Level Examination to recruit group B gazetted as well as non gazetted officers in various central government offices. This Examination is conducted once in a year. Every year, many graduates appear for this exam; however, a few successfully crack it. One needs to prepare with a lot of planning and dedication for a successful attempt.

It is conducted in Tier I, II, III followed by a Computer Skill Test / Skill Test. Tier I & II are online and Tier III is a written exam. The sections in Tier I are General Intelligence & Reasoning, General Awareness, Quantitative Aptitude, English Comprehension. It is conducted for 200 marks and the duration is 75 minutes. Please be aware that there is a negative marking of 0.50 marks per each incorrect answer. The sections in Tier II are General Studies (Finance & Economics), Statistics, Quantitative Abilities, English language and Comprehension. It is for 200 Marks and the duration is 2 Hours, also has negative marking of 0.25 marks.

The Study Plan for SSC CGL:

The Study plan discussed here is after researching what our toppers have recommended. So, the SSC CGL aspirants can stick to this plan.

Prepare a 60 day schedule that covers all the topics. This plan also includes time for Revision. Check this out.

Here comes your last 15 days which should be dedicated to Solving sample papers, mock tests. This is how our toppers prepared. An alternate to this study plan is to reduce the last 15 days of self-assessments, instead plan the mock tests on a daily basis right after the first week of preparation. 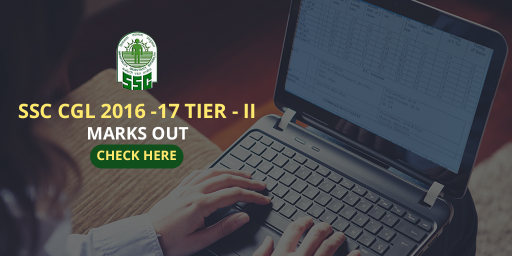 Staff Selection Commission declared the result of SSC CGL Tier II exam on Tuesday, 28 February 2017. As per the official report, 4795 candidates qualified for Tier III exam which will be conducted on March 19, 2017.

SSC CGLE Tier II exam was held from November 30 to December 2, 2016. The SSC also conducted re-examination for the same in January 2017 for some venues.

Today, SSC has released the marks of the candidates. Candidates can check the marks of SSC CGL Tier II papers on the link provided below:

Those who have qualified the Tier I and Tier II will be called for document verification. The candidates should, therefore, keep all their originals and photocopies of their age, education, address and other proofs ready.

Stay tuned for more updates on SSC CGL exam. Wish you All the Best! 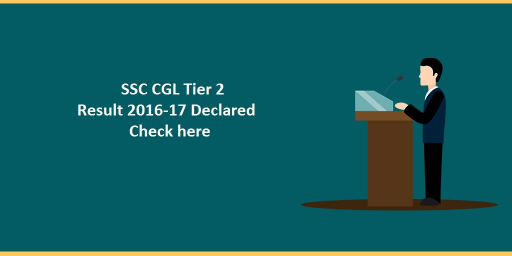 Staff Selection Commission will be releasing official notifications for SSC CGL Tier 2 results. We recommend our students to keep an eye on the release and go through it in detail when updated.

The official notification will be issued on the website – ssc.nic.in.  Click on SSC CGL result link for result.

The Important Dates for SSC CGL 2017 is given below:

The application form can be obtained from the official website of Staff Selection Commission. The apply mode will be online and offline.

SSC will organise Selection process in 4 Stages as mentioned below:

Education: The candidates must have attained graduation from a recognized university.

The application fees for the candidates applying for Group 'B' posts will be Rs.100/-

If you are planning to apply for the SSC CGL exam 2017, the following steps should be followed:

Start your preparation for the SSC CGL exam 2017 by enrolling for SSC CGL test series offered by us. The tests are as per the latest pattern and syllabus and designed by industry experts. 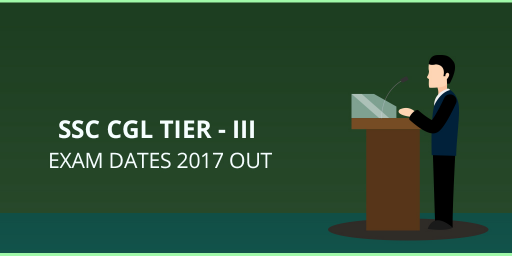 The Commission has released notification to conduct Combined Graduate Level Examination 2016-17 (Tier-III) tentatively on 5th March 2017. The Commission will Final date of Exam would be notified shortly.

SSC has released a notification regarding updates of JE exam 2016-17, Skill Tests for Data Entry Operators and LDCs between 11th February 2017 and 11th March 2017.

The re-exam was scheduled by the commission in these centres. The re-exam will be conducted in single slot on following dates.

We are providing the SSC CGL re-exam analysis for the paper held on 12th January.

Below is the  summary of ‘possible good attempts' of Paper I(Quant) and paper II(English) of SSC CGL Tier II 2016:

Difficulty Level of Paper 1: The difficulty level of the paper was of Moderate level.

Good Attempts to Clear cut off marks: If you attempt  75-85  questions with accuracy , you can easily clear the cut off marks.

Difficulty Level of Paper 2: The difficulty level of the paper was of Moderate to Difficult level.

Good Attempts to Clear cut off marks: An attempt of 165-175  questions with accuracy will help you clear the cut off marks.

Stay tuned for more updates and alerts. Till then, Happy Learning! 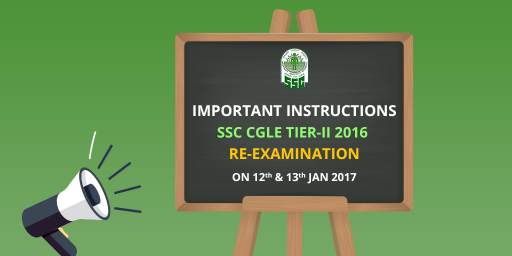 The revised date as announced officially is as follows:

The admit cards are already available and can be downloaded from the official website of the respective region.

Meanwhile, SSC has released as some important instructions for the candidates who are appearing the re-exam. We are briefing below the summary.

The Commission also clearly states that no further examination will be conducted in case, the re-exam scheduled gets disrupted.

We wish you All the Best for the Exam!

The SSC CGL Tier-II Examination 2016 was conducted by Staff Selection Commission from 30 November to 2 December 2016. A total of 1,49,330 candidates were eligible for the online Computer based test for CGL Tier II in two shifts per day at across the country in which 1,20,933 candidates have actually appeared. This is around 80.93% of the total qualified candidates.

The Commission has received representations from some of the candidates challeging that they faced technical and other related problems during the examination at some of the venues. The Commission, after due examination of video footages, has taken a serious view of certain candidates found to have been actively involved in disturbing and instigating other candidates to disrupt the process of the examination. The Commission proposes to take appropriate action against such candidates, which may include disqualification and debarment for a period of three years, in consonance with the extant guidelines. The SSC received many complaints till 9th December.

The exam was held in 356 centres of 57 cities. The exam was successfully conducted in 333 centres while in remaining 23 centres there were some issues due to which exam was cancelled.

Those candidates, whose grievances are found to be genuine, would be intimated for re-examination.The Commission has announced the re-examination for such affected candidates. The tentative dates for CGL tier 2 re-exam are on 12th and 13th January 2017.

The Commission has taken the decision after a detailed investigation after viewing the video footages and verifying with the technical service provider. We will update more info regarding SSC CGL examination. Stay tuned with our website.