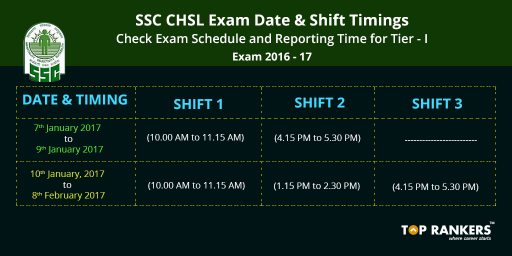 The below table describes the post wise vacancies available for the SSC CHSL exam 2016-17.

SSC CHSL Tier I Exam will be held from 7thJanuary to 9th January . The shift or slot  timings for the first three days will be as follows:

For the remaining days, i.e from 10thJanuary to 8th February , Exam will be held in three shifts as follows:

The Commission has also uploaded on its website the “Walk Through” and “Practice Test” to familiarise the candidates with the process of computer based examination for the SSC CHSL Exam 2016.

The latest pattern of SSC CHSL 2016 is as follows:

The total marks will be 200 and a composite time duration of 75 minutes will be given. There will be negative marking of 0.50 for each wrong answer.

SSC has released the admit card for the exam on 26th December and it can be downloaded regionwise from the official website.

Stay tuned with us for more updates. Till then , Happy Learning! 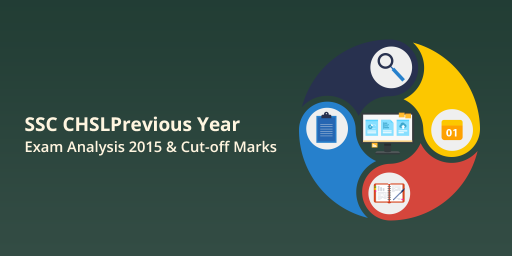 SSC CHSL is one of the most popular government examinations of all times. The Staff Selection Commission (SSC) conducts the SSC CHSL examination every year on annual basis to recruit candidates for the posts of “LDC (Lower Division Clerk)” and “DEO (Data Entry Operator)”. In 2015, about 70 lakh candidates appeared for this examination and an increase in this number is expected this year. The SSC CHSL 2016 Tier 1 examination is scheduled from 7th January 2016 to 5th February 2016.

As we all are aware of the exam pattern of SSC CHSL exam, the paper consists of questions from General Intelligence and Reasoning, Quantitative Aptitude, General Awareness and English. A negative marking of 0.25 marks will be applicable for each incorrect response. Except for the ‘English Language’ section, all other sections had questions in both ‘Hindi and English’.

The SSC CHSL 2015 examination was ‘Moderate’ as far as the difficulty level is concerned. An attempt of about 135 - 150 questions along with accuracy of around 85 - 90 percent can be considered as a safe one.

Note: We will update Soon Above Question papers. Stay tuned.

The cut- off marks of SSC CHSL Tier I examination is generally based on following factors:

Let us have a sneak peak at the previous year cut- off marks of SSC CHSL Tier I 2015:

It’s time for the expected cut- off marks of SSC CHSL Tier I 2016 exam:

We anticipate your good performance in SSC CHSL Tier I 2016 exam. We wish you good luck! 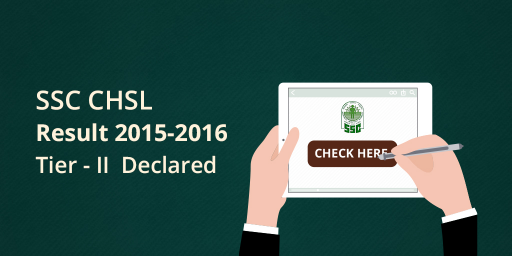 Staff Selection Commission, otherwise known as SSC, conducts CHSL examination every year to recruit candidates for posts of LDC (Lower Division Clerk) and DEO (Data Entry Operator). SSC conducts this exam every year on an annual basis based on number of vacancies in departments of Central Government. In the previous year, about 70 lakh students appeared for the SSC CHSL exam and this year the number is expected to increase.

Let us take a look at the SSC CHSL Tier II pattern:

Now that the SSC CHSL Tier II results are declared, we will illustrate you the procedure to view the results:

We hope that this article will help. Stay tuned for more updates on SSC CHSL exam. We wish you good luck! 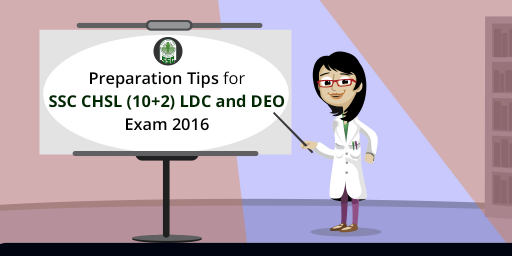 The SSC CHSL Tier I examination is an objective test of 200 marks which is conducted in online mode. Let us go forward and look at the exam pattern of SSC CHSL Tier I:

The SSC CHSL examination will comprise of four sections namely:

In a span of 10 days, we suggest you to go through all the topics which you have already prepared instead of going through any new topic. But the question is, what are the important topics and syllabus of SSC CHSL Tier I 2016 exam? Let us find it out:

How to crack SSC CHSL in 10 days? An appropriate study plan is all you need to master in any exam. But, sheer hard work along with study plan will make you perform your best. So, here we present you a 10 day study plan for SSC CHSL Tier I 2016 which will help you. But, please make sure you devote an hour every day for current affairs:

Day 3 – Solve 2 full length tests. Analyse your performance based on your preparation.

Day 4 – Pick up any two topics from Quantitative Aptitude and revise. Polish yourself for Descriptive Questions (Summarizing, Letter and Essays). Go through last one month’s current affairs.

Day 5 – Pick up any three topics of General Awareness and two topics of English language. Solve any one sectional tests and analyse (May it be any section).

Day 6 – Brush up the current affairs and GK of last 6 months. Solve any one full length test.

Day 8- Pick up any two topics of Reasoning and two topics of English Language (include reading comprehension). Solve a GK quiz at the end.

Follow this plan and boost up your preparation with confidence!

We wish you success in the SSC CHSL Tier I 2016 exam and hope that this article will help you in effective preparation by the time the ‘D- Day’ arrives. Good luck!

Hope you are doing good! The SSC CHSL  examination is round the corner and all the aspirants are ready to hit the score board with the highest number of marks. The Staff Selection Commission (SSC) conducts CHSL examination to recruit candidates for the posts of Low Division Clerk (LDC), Data Entry Operator (DEO), Sorting Assistant and Court Clerk/ Postal Assistant. 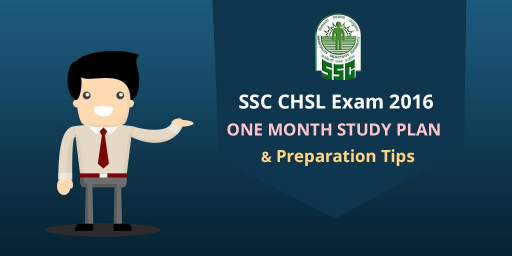 The registrations have started by 8th of October 2016 and the last date for closing of registration has been declared as 25th November 2016. The dates of SSC CHSL exam has been declared as 7th January 2016 to 5th February 2016. The results of the SSC CHSL  examination will be declared by the month of April 2017. Let us take a look at the exam pattern of SSC CHSL Tier 1 examination. We bring you the complete guide of ‘How to prepare for SSC CHSL  2016 exam in one month or 30 days? Students need to have the perfect blend of hard work and dedication and this plan will create wonders for sure:

We hope that this plan will help you score high in SSC CHSL  2016. Stay tuned for more updates. We wish you good luck! 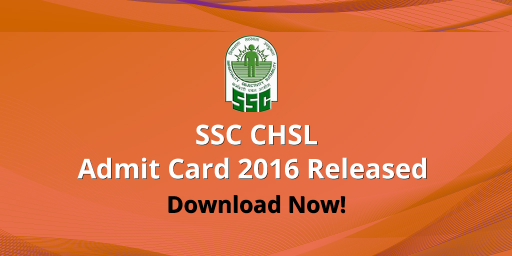 Staff Selection Commission has released the admit cards for the Combined Higher Secondary Level(CHSL) examination to be scheduled from 7th January to 5th february 2017. The SSC will conduct the exam in two tiers as given below:

Those who qualify in Tier 2 will have to appear for a skill test – typing test of 15 minutes duration.

The SSC conducts CHSL exam to recruit candidates for Lower Division Clerks(LDC) and Data Entry Operator(DEO) posts. The vacancy details are given below:

The admit card of SSC CHSL 2016 will have following details:

Candidates need to visit the official website of SSC.

Given below is the list of documents need to be carried along with the Admit Card:

Q1. What I should do if there is lot of delay in accessing the Admit Card page?

Ans : Don’t get panic, some time due to large number of pings at server it happens, just wait for 5-10 Minutes and start fresh Login.

Q2. I am unable to login / screen displays the login failed message?

Ans: Use Correct Registration No/Roll Number as received at the time of registration.

Q3. I am unable to generate call letter?

Ans: Try to login for number of times in a day after some Interval, if still unsuccessful, the contactSSC Helpdesk.

Q4. What to do after downloading the Admit Card ?

Ans: The candidates after downloading the Admit Card of SSC CHSL should take a print out of the same. The Admit Card should be carried along with the other documents to the examination centres. 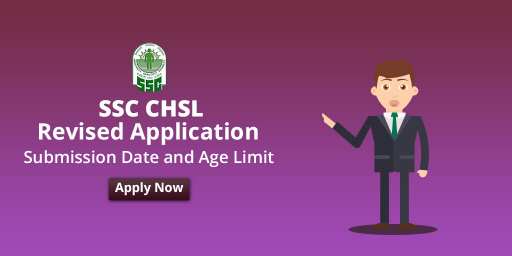 The notification regarding SSC CHSL exam 2016 has been released on October 8. The last date for applying was November 11.

The commission has revised the age limit criteria in order to apply for the CHSL(10+2) exam 2016.

The new age limit is as follows: 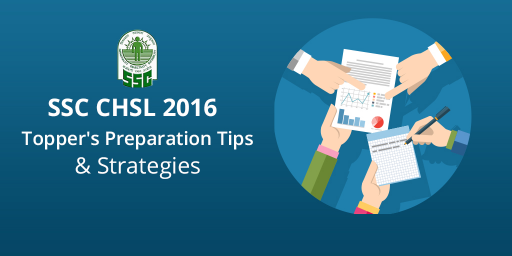 When it comes to preparing for a competitive examination, English Language has been one of those sections where students hesitate to attempt the questions. How to tackle this fear? Well, there is no shortcut to it. The only way is preparation. If you prepare thoroughly, English Language can be one of the most scoring sections.

The pattern of the SSC CHSL examination would be as follows:

SSC CHSL: How to prepare for English

You cannot master in English in just one day. You need to devote some sincere efforts and then English seems easy.

The following list of important topics need to be worked on a daily basis:

We hope that this article helps you in your preparation for SSC CHSL. Follow our website for more updates and significant job notifications. Stay tuned!

Staff Selection Commission (SSC) will be conducting the Combined Higher Secondary Level Examination for the post of LDC and DEO in the administrative offices that comes under Government of India. 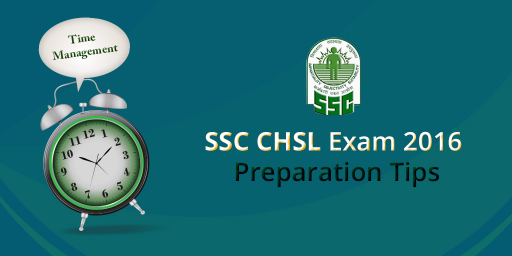 SSC CHSL 2016 will be held in two tiers. Tier 1 will be an objective paper and tier 2 will test the writing skills/typing skills of the candidates.

Time Management is a crucial factor in the SSC CHSL exam. Attempt those sections first which are well prepared. Marks for Tier 1 will be added to Final Merit so try to attempt more questions with good accuracy. Given below is an ideal time distribution Strategy for CHSL Tier 1 Exam.

Accuracy & Speed will be the Key for Getting Good Marks in Tier 1 Exam as per New Exam Scheme.

Quantitative Aptitude: Qunat is the section which plays a mighty role in the marks & deciding the merit list of candidates. Candidates who scores in this section have a good chance to score beyond 130+ marks out of 200.

Tips for SSC CHSL Typing Test/ Skill Test:- Candidates have to focus on their typing speed with preparation of written exam because it is not an one day affair to get 35 w.p.m or 8000 key depression per hour. Candidates have to practice regularly to attain typing speed. Only qualifying written exam doesn’t work, you have to pass in Typing Test also. Candidate need to give regular 1 Hour for Typing of English/ Hindi.

All the Best for the Exam. 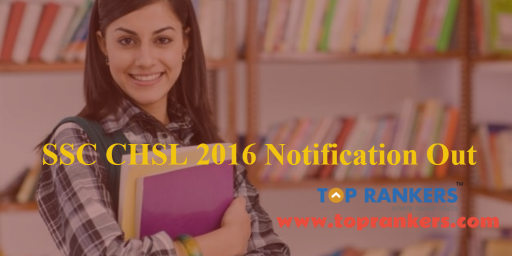 Note: Written exam consists of Objective Type Multiple choice questions only. There is negative marking of 0.25 marks for each wrong answer.