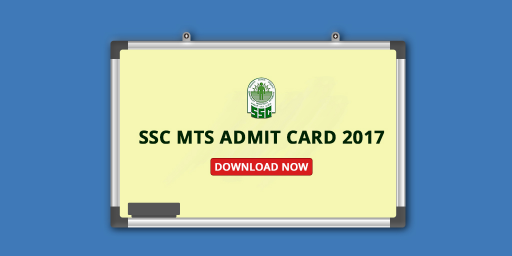 The SSC MTS 2017 Exam Dates (Tentative): The Exam (offline mode) will be hosted on the following three dates in April and May months:

The admit card for Central region can be downloaded from the below link:

The SSC MTS Admit Card/Call Letter will have following information.

SSC MTS exam consists of the following paper 1 (Objective Type Paper) and Paper 2 (Descriptive paper). The paper 1 will be based on general intelligence and reasoning, numerical aptitude, general English and general awareness. The Total marks will be 150. According to the SSC MTS notification, the duration of the examination will be two hours for general candidates and two hours and 40 minutes for visually handicapped/cerebral palsy candidates.

Paper 2 will be descriptive in which the candidates will be required to write short/essay/letter in English or any language included in the 8th schedule of the Constitution. This exam will be conducted for the candidates who meet the cut-off prescribed by the commission in Paper 1 for different categories.

If you have any issue in downloading the SSC MTS 2017 Admit Card, please contact the official contact the Staff Selection Commission.

All the Best for the exams!