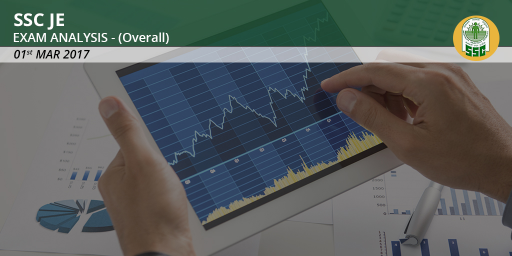 The Staff Selection Commission has finally completed the conduction of SSC JE 2017 exam. The exam is scheduled to take place in different shift from 1st March 2017 to 4th march 2017. We recommend the SSC aspirants to go through the exam analysis of today and prepare accordingly. Therefore, we present you SSC JE 2017 overall exam analysis 1st March (Paper 1).

The exam analysis will tell you about the questions asked in the exam, topics from which questions were asked and the pattern of the exam. These three key factors will help you score high in the exam and secure a good rank.

Summary of the Analysis:

As per the overall analysis of SSC JE Exam, Moderate was the difficulty level. An attempt of 130-138 questions can make you clear cut- off marks in a shot.

Good Attempts: An attempt of  38-43 questions can make you clear cut- off marks in a shot.

Good Attempts: An attempt of 31-36 questions can make you clear cut- off marks in a shot.

Good Attempts: An attempt of 65-70 questions can make you clear cut- off marks in a shot.

Technical was of moderate level and a scoring section. With good practice students will definitely score well in technical.  15-20 questions in which multiple statements are given and in these questions you have to choose which of the statement(s) is/are correct. the level of questions were good.