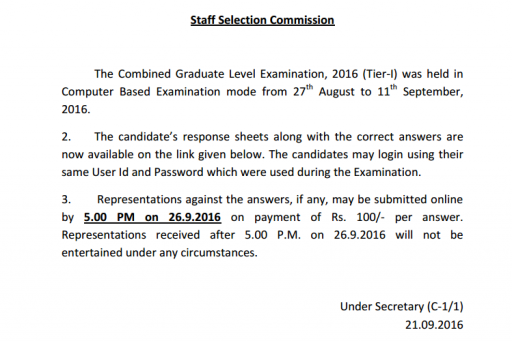 Staff Selection Commission had conducted the exam online for the first time this year. This year over 8 lakh candidates appeared for the exam. Candidates need to log in to the official website using the given user id and password to access the answer keys.

SSC has also provided online application facility for the candidates to submit their objections on the official answer keys released by the Commission. The same can be done by logging into the web portal by paying a nominal fee of Rs. 100 per answer for which a candidate wishes to object. The option of submitting the objections to SSC CGL answer key would be closed at 5 pm on September 26, so the candidates have five days to analyse the answer keys and submit objections.

SSC CGL 2016 Tier 2 will be held in November while the Tier 3 exam will be conducted in January. The final results would be announced by the end of April 2017. The results of SSC CGL Tier 1 examination will be available by the last week of September or first week of October, 2016.