The result of exam for Sub Inspectors in Delhi Police, CAPFs and Assistant Sub-Inspectors in CISF, Examination, 2016, Paper-I as held under was declared on 20th July, 2016. After the declaration of the result, the commission noticed some errors in the system. Because of the discrepancy, the result was suspended by the commission. 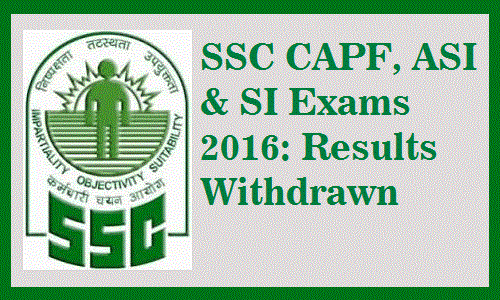 The Sub-Inspectors in CISF examination was initially scheduled to be conducted on March 20 but the SSC has organised the rescheduled examinations on June 4, 5, 6, 7 and 11.On June 27, the Commission uploaded the candidate’s response sheet along with the correct answers. Approximately 2.5 lakh candidates appeared for the exam.

issued an official notice informing that the results have been withdrawn/ held back and as soon as the issue gets resolved, the results will be published on the website.While the candidates were happy for clearing paper-I, now they have to wait further for their final results.

How will this Affect the Candidates:

The delay of results now is likely to have delaying affects on the schedule for Physical and medical tests. Moreover, the worrying factor for candidates is that those who may have qualified the paper-I in results announced earlier, now might have different outcome and the same goes for non-qualified ones. Meanwhile, SSC has made the whole recruitment process a bit hasty which is no way helping the candidates.

Get glued to our blog for more updates on SSC and other exams.