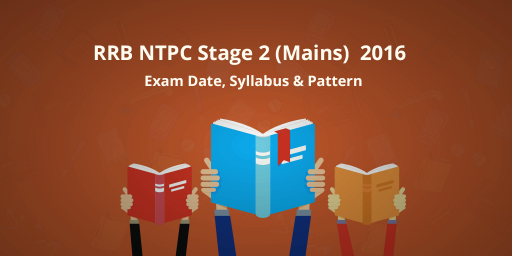 “Nothing is impossible as the word impossible itself means  I'm possible’”

The RRB NTPC trend is back again! The Railway Recruitment Board (RRB) has released notifications for RRB NTPC Mains stage 2 CBT syllabus and Exam details. A stage 2 ‘Computer Based Test (CBT)’ will be conducted by all RRBs for various NTPC (Graduate) posts. A number equal to 15 times the available vacancy will be invited for stage 2 CBT based on merit list of 1st stage CBT conducted in between 28/ 3/ 16 to 3/ 05/ 16.

The RRB NTPC (Stage 2) examination will be on held in 17th, 18th and 19th January 2017. The date of RRB NTPC is tentative and in case of any further changes in the schedule, the candidates will be intimated via official notifications by RRB.

The RRB NTPC (2nd stage) will consist of three sections:

The duration of the RRB NTPC (2nd stage) will consist of 120 objective type questions and the total time duration will be of 90 minutes.

Let us take a look at the syllabus of the RRB NTPC (Stage 2):

The general awareness section can have a scope of the following topics:

The Syllabus of Arithmetic in RRB NTPC 2nd stage would be:

The final selection in RRB NTPC (Stage 2) will be based on merit obtained in the Computer Based Test (CBT) of RRB NTPC (Stage 2). The result of Aptitude Test/Typing Skill Test can also be considered (whenever and wherever required) for final selection. The extant rules in 1st and 2nd stage CBT will be used in the process of normalisation of marks.

We hope that this article would be helpful. Stay tuned for more updates. Till then, hope for the best and prepare for the worst!