Staff Selection Commission (SSC) recently published a valid notification for all those candidates who have applied for the CGL exams with more than one application. This SSC CGL Multiple Applications Notice mentions some of the most vital points for the candidates to adhere. A thorough reading of these guidelines is mandatory to avoid SSC CGL 2016 pre-exams rejections of the applications. This will definitely help you make sure you get the needful done and adhere to the instructions as per the notification. 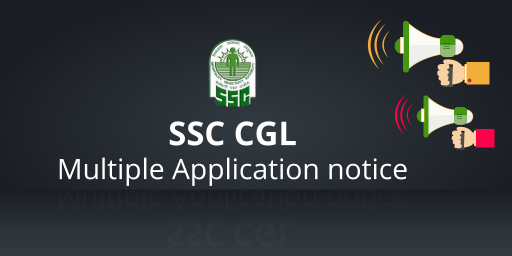 If you are a candidate who have applied for SSC CGL 2016 Exam you must check this notification.

Mentioned below are the points that need to be given a careful concern:-

The Admit cards for SSC CGL Tier-I examination will be uploaded on 10th August, 2016 on the SSC’s official websites. In case of issue of more than one shift of examination imparted by SSC, he/she must immediately bring this immediately to the notice of the concerned Regional Director. Also it’s the prime responsibility of the candidate to ensure him/her appearance only for one shift of the examination.

For the Tier-I exam, every candidate will be allowed to appear only in one shift and at one centre. In contrast, if the candidate appears for more than 1 shift, his/her candidature remains automatically cancelled. In addition the candidate will be debarred for a period of three years from appearing in the examination.

Moreover, in case of multiple applications filled the candidates are supposed to contact the concerned Regional Director/Dy. Director as soon as possible or latest by 5th August, 2016 with full details as mentioned in the form, such as:

(1) Both the Registration Numbers

For the further information or clarification respective to the multiple applications the details can be found on: Official SSC CGL Multiple Applications Notice page. The candidates must make sure to read the official SSC CGL Notification carefully and adhere to the same.