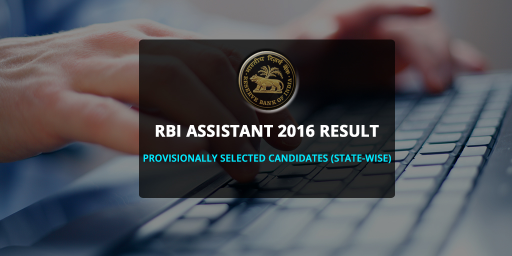 The Reserve Bank of India(RBI) conducted the Mains examination for the recruitment of 610 Assistant to various RBI branches on 24th January 2017. RBI has released the list of roll numbers of the provisionally selected candidates who qualified in the examination.

As per RBI guidelines, the list released for the allotted candidates is provisional in nature and is subject to the fulfilment of following -

Candidates will now have to appear for the Language Proficiency Test,which will be of qualifying nature and only those candidates who qualify in the said test shall be appointed in the Bank. As per the notification of RBI 7th February, Interviews will not be conducted for the RBI Assistant Post from this year.

You can go through the official notification for the same from the link below :-

Stay tuned for more updates on RBI Assistant 2016 Result and other exams.

Congratulations to all the selected candidates!