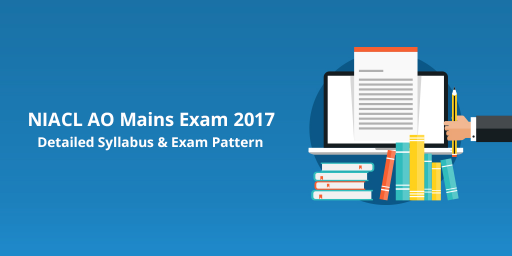 New India Assurance Company Limited (NIACL) is a general insurance company owned by Government of India. It has issued vacancies for Administrative Officers Scale-1. The selection is based on the online exam to be conducted in two phased followed by an interview.

The NIACL AO prelims was conducted on 17th December 2016. The result was declared on 23rd December  2016. Those who are qualified can appear for the NIACL AO Mains exam , which is scheduled on 10th January 2017.

We are giving the detailed exam pattern and syllabus for NIACL AO Mains below:

The phase II or Main Examination will consist of Objective Tests for 200 marks  of 2 hours and Descriptive Test for 30 marks of half an hour.The descriptive test will be conducted immediately after the completion of Objective Test.

Negative marks: Each wrong attempt will fetch you 0.25 marks.

The Descriptive Test will be a 30 minutes test of English Language. It will consist of: