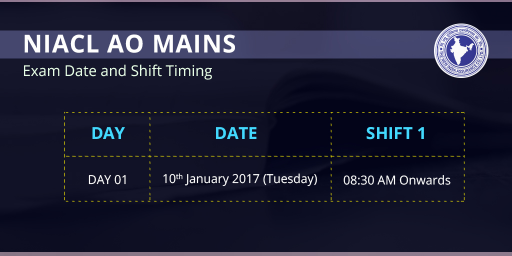 Let us have a brief overview of the exam:

Selection Process: There will be three phases of selection. The prelims and mains exam followed by an interview.

The phase II or Main Examination will consist of Objective Tests for 200 marks  of 2 hours and Descriptive Test for 30 marks of half an hour.The descriptive test will be conducted immediately after the completion of Objective Test.

Negative marks: Each wrong attempt will fetch you 0.25 marks.

The Descriptive Test will be a 30 minutes test of English Language. It will consist of:

The shifts/slots along with the reporting time are given below.

The exam will be held in a single shift. Make sure that you reach the venue before the reporting time.

Team TopRankers wishes you All the Best for the exam !