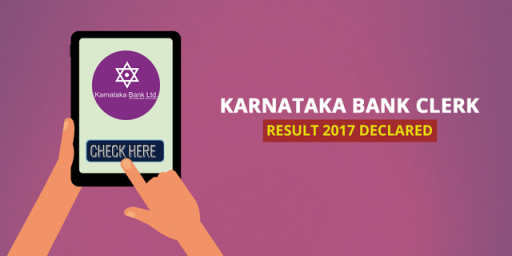 Karnataka Bank has declared the result of Karnataka Bank Clerk Recruitment 2017. All candidates who have appeared for online test can check their result below.

Steps to check the Karnataka Bank Clerk Result are as follows:

Candidates who successfully clear the online test will be called for an interview.

(a) The estimation of cut- off marks depends on several factors like:

(b) Let us look at the expected cut off marks:

The selected candidates will be on probation for a period of six months and on satisfactory completion of the probationary period, will be confirmed, subject to rules and regulations of the Bank. The initial Salary will be Rs. 23,500/-p.m. exclusive of Medical Insurance Coverage, Leave Fare Concession (LFC), Canteen Allowance, News Paper Subscription Allowance, Medical Aid, etc.

Stay tuned for more updates on Karnataka Bank Clerk Result 2017. We wish you All the Best!