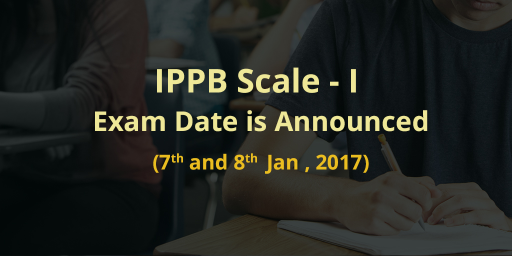 The India Post Payments Bank (IPPB) is a newly formed Public Limited Company under the Department of Posts. IPPB will conduct an online recruitment exam for the recruitment of officers at junior and senior levels.

Selection will consist of the following steps:

The IPPB Scale I officer prelims exam will be held on 7 and 8 January 2017.

The admit cards for IPPB Scale I officers – Assistant Manager (Territory) is available on the official website.

Note: Duration of the exam: A composite time of 60 Minutes

The candidates MUST pass in each of the above Objective tests. The passing marks in each test will be decided by IPPB on the basis of the performance of all the candidates appearing in the tests. Candidate may accordingly allocate their time to each test within total time of 60 minutes for all the three tests put together.

Candidates will have to pass in each of the objective tests. The Scores of Online Examination will be obtained by adopting the following procedure :

Stay tuned with us for more updated. Till then, Practice and Grow!