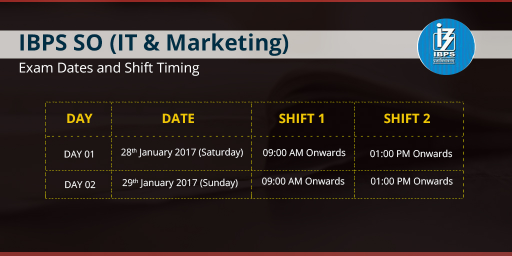 IBPS (Institute of Banking Personnel) has released notifications for the posts of IT and Marketing Officer. The IBPS SO (Specialist Officer) CWE- VI exam will be 28th January 2017 and 29th January 2017. This examination is conducted to recruit candidates for fields like Law Officer, Agricultural Officer, Research Officer, RajSabha Adhikari and others.

IBPS SO- IT and Marketing Officer 2016- 17- Eligibility Criteria

The exam pattern of the IBPS SO IT officer and Marketing officer is as follows:

The exam will be conducted 9: 30 AM onwards.

We wish you all the very best for the IBPS SO and Marketing 2016- 17 exam. Stay tuned for more updates. Good luck!