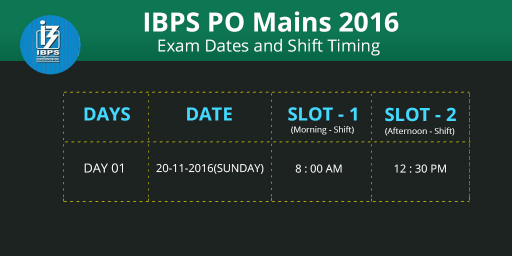 The IBPS PO Mains will have five sections - Reasoning, Quantitative Aptitude, GK, Computer Awareness and English.  Those who qualify will be eligible for the final round of selection which is interview. The call letter for the mains exam has already been released and available in the official website.

The result of IBPS Prelims exam will be annouced in the last week of October 2016. The mains exam is scheduled to be held in 20th November 2016. Those who qualify in the preliminary exam

can download the call letter for Mains exam in the first week of November 2016 from the official website.

The candidate will lose 0.25 marks for each wrong answer in the both prelims and mains exam.

Candidate should pass in each and every section separately to qualify in the IBPS PO 2016 exams.