How to Solve Coding Decoding Problems for SBI PO 2017 Exam 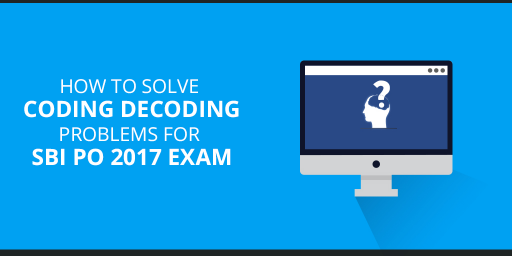 Are you preparing for SBI PO 2017? Do you face issues while solving coding- decoding questions of ‘Reasoning Ability’? If yes, then don’t worry. We have the right solution for you. In this article, we will illustrate techniques to solve Coding-Decoding Problems for SBI PO 2017 Exam.

SBI PO, being one of the most competitive examinations of all times, has the trickiest questions as well. It is important for students to know important short tricks and concepts on ‘Coding- Decoding’ to score well in this section. The shortcuts and tricks in this content will help you score high marks in Coding and Decoding section.

How to Solve Coding- Decoding Problems- The right approach

Step 1- Pay attention to the numbers or alphabets given in the code keenly.

Step 2- Try to figure out the order by which the numbers/ words/ alphabets are arranged.

Step 3- Fill in the blank with the appropriate number/ letter/ word.

How to Solve Coding- Decoding Problems- Basics you must know

If 'ish lto inm' stands for 'neat and tidy'

If 'qpr inm sen' stands for 'small but neat'

If 'hsm sen rso' stands for 'good but erratic'

What would 'but' stand for?

Which code means for ‘very’?

If MADRAS in coded form is written as NBESBT, how would BOMBAY be coded then?

In this, each of the letter in the word is moved in the manner of one step forward to get the code.

Say if white is blue, blue is red, red is yellow, yellow is green, green is black, black is violet and violet is orange, what would be color of human blood?

Explanation- Red is the colour of human blood. But as per the question, as red is named as yellow. So, the answer is yellow.

We hope that this article helps to prepare for Coding and Decoding questions for Reasoning of SBI PO exam. Stay tuned for more updates. Good luck!