We have come with a great news you all the banking aspirants for the year 2018-19. IBPS has recently released the IBPS Exam Calendar with the tentative IBPS exam dates of IBPS PO, Clerk, RRB, SO Exam. In this article, you will find each and every detail related to IBPS Exam Calendar PDF 2018. Get all the tentative dates of IBPS Preliminary exams as well as Mains exam from the tables shared below.

Every year, in the month of January/February, IBPS publishes its exam calendar for next one year. IBPS has already published a tentative calendar of IBPS PO, Clerk, SO and IBPS RRB Exams 2018-19. Let’s take a look at the list of important dates according to the IBPS Exam Calendar 2018-19.

IBPS has released admit card for IBPS clerk preliminary exams. IBPS Clerk 2017 is for recruitment of clerks in any of the 19 participating banks.

Candidates have to qualify in each of the three tests by securing cut-off marks to be decided by IBPS. Candidates who qualify in IBPS Clerk Preliminary exams will be selected for Mains exams.

The IBPS Clerk Prelims admit card 2017 contains details like your name, photo, exam date & time, venue. It is compulsory to carry IBPS Clerk Prelims admit card 2017 to the examination hall. Candidates who do not carry the admit card will not be allowed inside the examination hall. Along with Admit card, candidates must also carry valid identity proof like AADHAR card, PAN Card, Voter ID or Drivers license.

The selection process for IBPS PO 2017 exam comprises of three phases – Prelims, Mains and Interview. The preliminary exams is qualifying in nature. The final merit list is prepared based on the cumulative score in the Prelims, Mains and the interview.

It is expected the cutoffs will be higher this year, given the number of applicants who are giving the exam. The table below gives the expected and sectional cutoff for the different categories.

In 2015, IBPS introduced preliminary exams for the first time.

Cutoffs are applied in 2 stages:

1. On Scores in individual Sectional

The Maximum and Minimum combines scores for the Mains Examination and interview for IBPS Probationary Officer are as follows:

The scheme of examination has been preliminary exams, mains exams and interview since 2015. Earlier to that, there were no preliminary exams and hence we did not rely on those parameters. While, taking mock tests try and score more then the given cutoffs. Mock tests are a true reflection of how well you can do in the real exams. Doing well in mock tests, ensures that you are at a safe place. There are tonnes of study materials available online.

IBPS or the Institute of Banking and Personal Selection is a autonomous body that is set up for conducting recruitment and banking exams. IBPS Banking exam is taken by lakhs of students every year. IBPS is one of the most sought after exams and is known for its IBPS PO and Clerk exams. More than 19 banks participate every year in the IBPS exams.

IBPS or the Institute of Banking and Personal Selection is a autonomous body that is set up for conducting recruitment and banking exams. IBPS Banking exam is taken by lakhs of students every year. IBPS is one of the most sought after exams and is known for its IBPS PO, Clerk and RRB exams.

IBPS PO and IBPS RRB are both very challenging exams. However, there are lot of difference in IBPS PO and RRB. The article explores the several differences between IBPS RRB And IBPS PO and see what both of them have in store for the banking aspirant.

More than 19 banks participate every year in the IBPS PO exams.

Candidates have to qualify in each of the three tests by securing cut-off marks to be decided by IBPS. Adequate number of candidates in each category as decided by IBPS depending upon requirements will be shortlisted for Online Main Examination.

Interview: Candidates who qualify in the Preliminary and mains examination will be selected for Personal interview.

Aspirants for IBPS PO must be graduate from any discipline awarded by a government recognized university.

Career Path of a Probationary Officer in a Bank:

Before completion of probation period of 2 years, Probationary officer will be asked to perform any type of bank job to get them acquainted with all types of bank job. They are often given training and practical job. Probationary officer is also asked to deal in public relations and handle complaints of customers and resolve their complains. He has to deal in tasks like planning, budgeting, marketing, loan processing and approval, investment management.

They also have to work as a clerk and deal with loan related document when people come to ask for loans. They should know all the latest developments in banking industry and also know about circulars issued by the bank. Probationary officer will be asked to do all types of work and promotions will be based on performance. The job offers promising career path. At a later stage, candidates also have to do supervise and also do clerical work to increase the business of the bank.

Roles and responsibilities of IBPS PO

You will be multitasking in a nationalized bank. As a Probationary officer, you will have to work in various departments like Deposits, Loans, Clearing, pensions, payments, cheque clearances, Fixed deposits, ATM and Internet banking, Credit card, account closure, account statement, ATM issues, etc. You may also have to handle cash transactions. One must be flexible in doing any type of work in the bank. You need to handle the customers and provide them a solution for all their banking needs.

Salary of IBPS PO: IBPS PO earn a annual income of Rs. 5,57,640. They have a basic pay of Rs. 38, 703 after the recent hike given by Seventh Pay commission for new PO’s. This is eligible for a steady raise after promotion.

Promotions: IBPS PO is a well defined career path that is determined by performance and potential. Today, it much less time for a newly joined PO to scale up the ranks than it did before. One can become General Manager after 14-15 years of service. However, reaching top ranks is decided by the government and not by individual banks.

Career Progression of a Bank PO:

IBPS RRB is to gain entry into Rural banks and candidates working for RRB banks will mostly be working in rural areas.

IBPS RRB Officer Scale I Post offers various perks and benefits and hence the demand for the post has been growing. Work pressure is lesser in comparison to commercial banks of the country. Employees can enjoy a good work-life balance under IBPS RRB Officer Scale I Post and candidates are eligible for 100% DA. The cost of living is usually lower as candidates are posted in rural areas. IBPS RRBs have a lot of growth potential as several governmental departments and government agencies liaison with the IBPS RRBs and partner with them for work. Candidates must show their performance with what is alloted to them.

Thus we can see that IBPS PO and IBPS RRB both have very different career roles and mostly this will vary based on the candidate. However, work pressure at IBPS PO will be intense accompanied by frequent transfers in comparison to IBPS RRB where it can be very calm atmosphere to work.

IBPS PO Notification 2017 PDF download– The Institute of Banking Personnel (IBPS) conducts examinations annually for the post of Probationary Officers (PO). The exam is one of the most important exams among other bank exams and is due to the cut- throat competition. Every aspirant is waiting for IBPS PO notitification 2017 to be published. After publication of the notification, students need to study as per the IBPS PO exam pattern. Students can start practising with IBPS mock tests and IBPS previous year question papers.

Note- The IBPS PO Notification 2017 official notice is not yet out. It is expected to be out soon (tentative- July- August 2017). This PDF is an unofficial release and only for reference purpose. We will update you with the official version as soon as it is published.

The IBPS PO notification 2017 exam date list (expected). As soon as the official IBPS notification is released, you will get to know the offiicial exam dates

Aspirants must have Graduation degree from a recognized institute by govt.

The application fee for IBPS PO exam is

The selection process will be done by score card of Common Written Examination (CWE). The candidates who have qualified for the exam called for interview round and will get appointment letters.

In addition to pay scale, allowances are also offered which include-

Dearness Allowance (DA)- Cost of living adjustment allowance which is paid to govt and public sector Probationary officers. It is revised on a quarterly basis and it is based on consumer price index (CPI). The calculation of DA depends on inflation and it can also go up with higher inflation and come down if the inflation rate is in negative.

Conveyance allowance – For commute between home and office.

The IBPS PO syllabus 2017 is as follows-

The Institute of Banking Personnel Selection will release the final result of mains exam and interview by today evening. IBPS will recruit 8822 vacancies.

In case two or more candidates have obtained the same score, IBPS will decide the merit order as per date of birth (the candidate senior in age is placed before/ above the candidate junior in age), as per the prevailing practice. The weightage of main exam and interview will be 80:20 respectively.

Check Below the list of Shortlisted Candidates for IBPS PO, SO and Clerk 2016:

List of Participating Banks in IBPS Recruitment (PO, SO, Clerk) 2016:

We wish all the candidates best of luck! 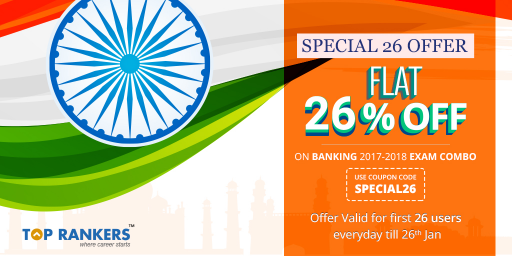 On the eve of Republic Day, it gives us immense pleasure to bring the “Republic Day” deal only for you. We value your commitment and try to come up with great opportunities for you to practice well. Team TopRankers launches the SPECIAL26 Offer on Banking 2017-18 exams combo packs. Use coupon code SPECIAL26 and get FLAT 26% OFF on Banking ( IBPS, SBI ) Clerk Pack, Banking ( IBPS, SBI ) PO pack and Most Popular Banking Pack for 2017-18. The first 26 users of each day will be able to avail the special discount of 26 % off till 26th January 2017.

Popular Highlights of our tests:

Hurry! Grab the offer before you miss it. All the best! 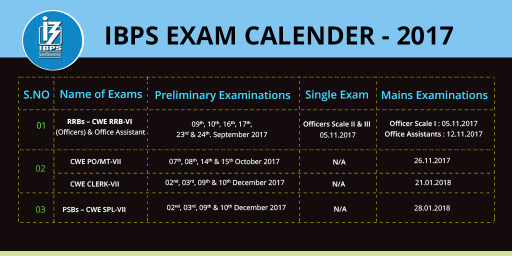 As per the IBPS schedule of 2017, following are the list of exams to be held:

The IBPS exam calendar is the official document released by IBPS (Institute of Banking Personnel) with the official information regarding exam dates and annual schedule of IBPS. This helps you start your preparation prior to the exam and the latest update is there will be a ‘Tier 2’ exam for SO post from this year.

The posts for which IBPS Recruitment 2017 is going to take place are:

Let us now take a look at the IBPS exam Calendar 2017:

The Eligibility criteria of IBPS Recruitment 2017 goes as follows:

IBPS has released call letters for the posts of Research Associate / Hindi Officer / Law Officer for the year 2016. The interview will be held in the month of December 2016. In order to download the call letters for posts of IBPS Research Associate / Hindi Officer / Law Officer, you need to enter credentials like registration number, date of birth and password.

Stay tuned for more updates. We wish you good luck!