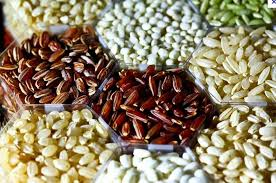 Researchers at Assam Agricultural University have developed two rice varieties, namely Ranjit Sub-1 and Bahadur Sub-1.
•    These rice varieties were developed to get better yields under submerged conditions in state mainly Barak Valley.
•    Most parts of the state including Barak valley is prone to periodical flash floods particularly during the monsoon season.
•    These are ideally suited for such submerged areas in the khariff season.
•    These new rice variants are improved forms of the Ranjit and Bahadur varieties which the farmers of the state have been using for years.
•    An additional gene has been incorporated in the new variants which ensure productivity even if the crops remain submerged during flash floods.
•    Assam is a state in northeastern India known for its wildlife, archeological sites and tea plantations. In the west, Guwahati, Assam’s largest city ,features silk bazaars and the hilltop Kamakhya Temple.
•    Umananda Temple sits on Peacock Island in the Brahmaputra river. The state capital, Dispur, is a suburb of Guwahati. The ancient pilgrimage site of Hajo and Madan Kamdev, the ruins of a temple complex, lie nearby.