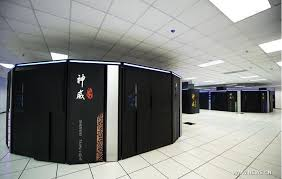 Chinese supercomputer Sunway TaihuLight with 93 petaflop/second speed was on 20 June 2016 declared as the world’s fastest supercomputer.
•    It was revealed in the TOP500 list of supercomputers released at the International Supercomputing Conference (ISC) in Frankfurt, Germany.
•    The list further revealed that the USA is not home to the largest number of systems. With a surge in industrial and research installations registered over the last few years, China leads with 167 systems and the USA is second with 165.
•    Asian share of 218 systems, up from 173 in November 2015, includes 8 supercomputers owned by Indian-based organizations.
•    This supercomputer can perform 93 petaflop operations per second.
•    It was developed by the National Research Center of Parallel Computer Engineering & Technology (NRCPC) and installed at the National Supercomputing Center in Wuxi.
•    It displaced the Tianhe-2, an Intel-based Chinese supercomputer that has claimed the top spot on the previous six TOP500 lists.
•    With 10649600 computing cores comprising 40960 nodes, is twice as fast and three times as efficient as Tianhe-2.
•    Sunway TaihuLight demonstrates the significant progress that China has made in the domain of designing and manufacturing large-scale computation systems as it is completely based on homegrown processors.