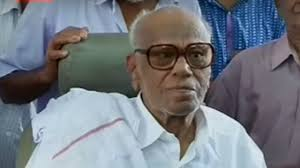 Veteran and former MLA and MP K Anirudhan passed away at his residence on 23rd May 2016 at the age of 92.
•    Anirudhan was suffering from age-related ailments for some time and died last night, the sources said.
•    Known for his significant contribution to build the Communist party movement in southern parts of the state, Anirudhan was elected to the state assembly in 1963, 1965, 1979 and 1980.
•    Anirudhan, also an active trade union leader, had represented the then Chirayinkeezhu constituency near here in Lok Sabha after defeating former chief minister R Sankar in the 1967 elections.
•    He is survived by wife Sudharma and sons, CPI-M Lok Sabha MP A Sampath and Kasthuri.
•    He was attracted to the independence movement during his school days.
•    He was forced to join a school in nearby Kanyakumari district as he was expelled from both St Joseph School and SMV School for participating in the freedom struggle.