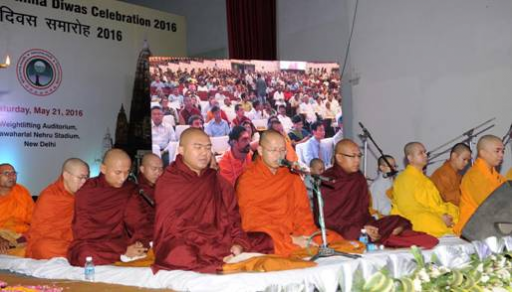 On 21st May ‘International Buddha Poornima Diwas 2016’ was celebrated to commemorate Buddha’s Birth, Sambodhiprapti and Mahaparinirvana falling on the auspicious full moon day of the month of Vaishakh.
•    Rajnath Singh, Union Minister for Home Affairs was the Chief Guest. Dr. Mahesh Sharma, Minister of State for Culture & Tourism (I/C) and Civil Aviation, Shri Kiren Rijiju, Minister of State for Home Affairs and Shri Upendra Kushwaha, Minister of State for Human Resources Development were present at the occasion.
•    Bhaghwan Buddha was a very large hearted person and solutions to all problems of mankind are contained in his teachings.
•    Babasaheb Bhimrao Ambedkar adopted Buddism as he was greatly influenced with the sacred teachings of Bhagwan Buddha.
•    He wished all Buddhists worldwide on this auspicious occasion.
•    Ministry of Tourism has launched a programme namely “Swadesh Darshan” which has a special component of “Buddhist Circuit” which connects all religious places of Buddhism very conveniently
•    Government of India attaches great importance to Buddh Poornima and now onwards it will be celebrated every year like this.
•    UN recognizes the importance of this day. The UN Day of Vesak Celebration is internationally a cultural and humanistic festival of the United Nations International Organizing Committee.