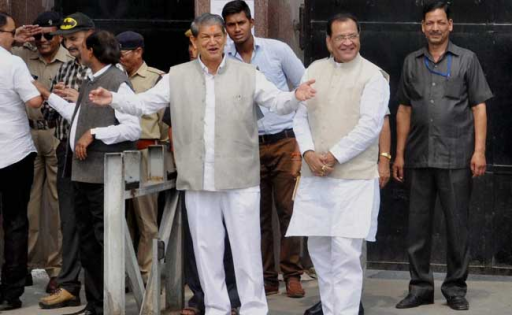 On 11 May 2016 in the legislative assembly, the Harish Rawat-led government got the majority.
•    Harish Rawat got 33 votes against 28 votes out of 61 qualified members who voted in the assembly.
•    SC said that Harish Rawat can take charge as the Chief Minister of the.
•    President Rule under Article 356 was imposed in Uttarakhand on 27 March 2016
•    It was done on the recommendation of the Union Cabinet.
•    Conduct of ‘composite floor test’ in the Uttarakhand legislative assembly was ordered by the Supreme Court on 5 May 2016.
•    On 9 March 2005 Apex court passed the order for Jharkhand Assembly.
•    It was done on the line of earlier order for a composite floor test in Uttar Pradesh in 1998.
•    "President's rule" refers to the imposition of Article 356 of the Constitution of India on a State whose constitutional machinery has failed.
•    In the event that a State government is not able to function as per the Constitution, the State comes under the direct control of the central government