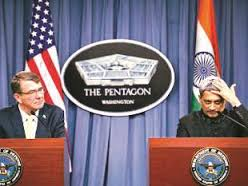 On 20 May 2016 The US House of Representatives gave its nod to a bipartisan legislation to improve defence ties with India.
In this regard, an amendment to the National Defence Authorisation Act (NDAA) was approved by the House. The amendment is dubbed as ‘Enhancing Defence and Security Co-operation with India’.
•    The legislation, once approved by the Senate and the President, will bring the country’s bilateral relations with India on par with its NATO allies and Israel.
•    It seeks to promote greater defence trade and encourage additional military cooperation between the United States and India.
•    The legislation is primarily aimed at easing restrictions on sale of defence equipment and technology transfer to India.
•    It encourages the executive branch to designate an official to focus on US-India defence cooperation.
•    It will facilitate the transfer of defence technology and maintain a special office in the Pentagon dedicated exclusively to the US-India Defence Technology and Trade Initiative (DTTI).
•    On the bilateral front, the legislative approval is an important milestone in the US-India relations as it addresses one of the tricky issues of defence technology transfer and sale.
•    The legislation will give enough leverage to the executive branch of the US Government in dealing with India. For India, it encourages the government to authorize enhanced military planning with the USA.
•    The future missions of mutual interest will be such as humanitarian assistance and disaster relief, counter piracy, and maritime domain awareness.