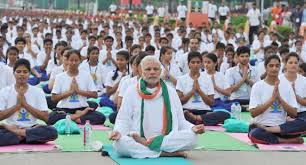 Union Ministry of AYUSH released a Yog Geet (Song) on 17 June 2016 in connection with the celebration of International Day of Yoga–2016.
•    The song is of 3 minutes and 15 seconds in Hindi language.
•    The song is written and produced by Deeraj Saraswat.
•    Gandhar TD Jadhav and Gatha Jadhav were given their voice.
•    The Music of the song is composed by Sumanto Ray.
•    As part of celebration of 2nd International Day of Yoga a National level competition for selection of a Yog Geet was organised by the Ministry of AYUSH.
•    About one thousand entries were received for Yog Geet out of which the Committee OF Yoga Experts constituted for the celebration of International Day of Yoga–2016 under the chairmanship of Dr HR Nagendra selected released one.