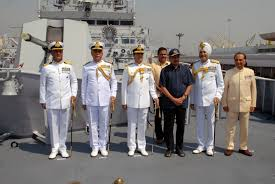 Union Defence Minister Manohar Parrikar inaugurated a state-of-the-art submarine assembly workshop at the Mazgaon Dock Shipbuilders Limited (MDL) in Mumbai, Maharashtra.
•    The inauguration is considered as a major step towards self-sufficiency in the area of submarine construction for the Indian Navy.
•    The newly built Submarine Marine Assembly Workshop is a pre-engineered building structure built at a cost of Rs 153 crore. It is capable to handle construction of multiple submarines simultaneously and will make it possible to assemble five submarines in the workshop at the same time.
•    The workshop has features such as sewage treatment plan, grey water treatment plant, rain water harvesting, oily water separator plant for treatment of sewage, oily water and grey water respectively, with zero discharge into the municipal drains.
•    This facility will ensure lesser delays in building indigenous submarines for Indian Navy in the long run as well as for the envisaged second line of Scorpene submarines under strategic Project P 75I.