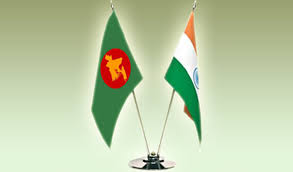 The transit facility was signed during Prime Minister Narendra Modi’s visit to Dhaka in June 2015 to boost trade and facilitate seamless movement of goods in the Bangladesh region.
The trans-shipment operations were launched at the Ashuganj port with a cargo vessel unloading the maiden consignment to be transported to Tripura through Bangladeshi territory.
The first ship from Kolkata carrying 1000 tonnes of steel and iron sheets reached Ashuganj river port in Bangladesh.
•    The facility that runs through Bangladesh territory cuts the Kolkata-Agartala via Siliguri’s ‘chicken neck’ distance from 1600 kilometers to 800 kilometers.
•    It will reduce the time of the journey from 30 days to 10 days.
•    It will reduce the transportation costs from 67 US dollars to 35 US dollars per tonne while transporting from mainland India to the north-eastern states.
•    India pays transit fees of 192.25 dollars per tonne as negotiated between India and Bangladesh.
•    Inland Water Transit & Trade Protocol
•    The revised Inland Water Transit & Trade Protocol under India-Bangladesh Bilateral Trade Agreement gives India and Bangladesh the right to each other’s territory for transiting goods to third countries.
•    The Kolkata-Ashuganj-Tripura transit route gives mainland India easier and cheaper access to the seven northeastern states.
•    Bangladesh can use Indian Territory to transit goods to Nepal and Bhutan while India can access Myanmar via Bangladesh.
•    The protocol facilitates trade and development not only between India and Bangladesh but in the entire sub-region facilitating trade and development in the sub-region.