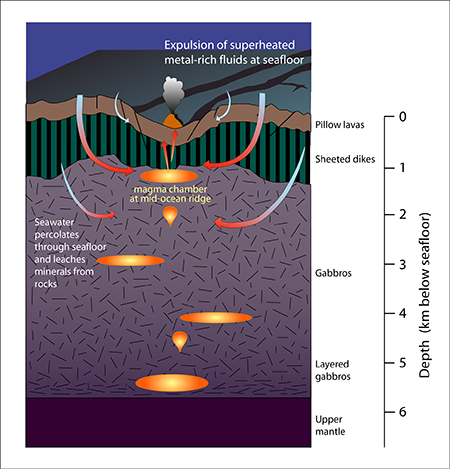 The Union Cabinet on 15 June 2016 gave its approval for signing of a 15 years contract by the Ministry of Earth Sciences with the International Seabed Authority (ISA).
•    The contract seeks to undertake exploration and other developmental activities related to Polymetallic Sulphides in the allotted area of 10000 sq km.
•    Under the contract, exploration will be done in parts of Central and South - West Indian Ridges (SWIR), located in the Indian Ocean.
•    India's exclusive rights for exploration of Polymetallic Sulphides in the allotted area will be formalized.
•    It will enhance India's presence in the Indian Ocean where other players like China, Korea and Germany are active.
•    The exploration program will be implemented by the Ministry of Earth Sciences with the participation from various national institutes and research laboratories and scientific establishments.
•    Deep seabed Poly-Metallic Sulphides (PMS) contain iron, copper, zinc, silver, gold, platinum in variable constitutions.
•    They are precipitates of hot fluids from upwelling hot magma from deep interior of the oceanic crust discharged through mineralized chimneys.
•    PMS in the Ocean Ridges have attracted worldwide attention for their long term commercial as well as strategic values.
•    It is an autonomous international organization that governs non-¬living resources of seabed lying in international waters.
•    It was set up under the 1982 United Nations Convention on the Law of the Sea and the 1994 Agreement relating to the Implementation of Part XI of the United Nations Convention on the Law of the Sea (UNCLOS).
•    It primarily regulates deep seabed mining and gives special emphasis to ensuring that the marine environment is protected from any harmful effects which may arise during mining activities, including exploration.
•    It formulates regulations for prospecting and exploration for Polymetallic Nodules in order to ensure environmentally sustainable development of the precious resources.
•    Its headquarters is located in Kingston, Jamaica. Nii Allotey Odunton of Ghana is the Secretary-General of the authority.
•    It encourages marine scientific research in the international seabed area through its Endowment Fund. The fund supports the participation of qualified scientists and technical personnel from developing countries.