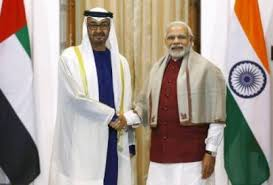 •    The Union Cabinet gave its approval for the MoU between Reserve Bank of India (RBI) and Central Bank of United Arab Emirates (UAE) on co-operation concerning currency swap agreement.
•    The Agreement was signed in February, 2016 during the official visit of Crown Prince of Abu Dhabi Sheikh Mohammed Bin Zayed Al Nahyan to India.
•    The MoU commits that RBI and Central Bank of UAE will consider signing a bilateral Currency Swap Agreement on mutually agreed terms and conditions.
•    The MoU will help to further strengthen the close economic cooperation and relationship between India and UAE.
•    A currency swap involves exchange of principal and interest in one currency for the same in another currency.
•    It is considered to be a foreign exchange transaction.
Reserve Bank of India is India's central banking institution, which controls the monetary policy of the Indian rupee. It commenced its operations on 1 April 1935 during the British Rule in accordance with the provisions of the Reserve Bank of India Act, 1934.

Infosys will set up its second biggest facility worth nearly Rs 600 crore in Bangalore
•    It received necessary clearances from the Karnataka Government.
•    The new facility will be set up in north Bangalore
•    It can accommodate 8,000 employees.
•    The Karnataka Government cleared Infosys' proposal to set up an ‘Special Economic Zone' (SEZ) near the Bangalore International Airport.
•    According to Industries Department officials, the company had sought an additional 60 acres of land adjacent to the 40 acres of land already allotted to it.
•    In May, Infosys received clearance for 7.23 acres of land near its existing IT SEZ campus in South Kanara.
•    Infosys had said that it plans to open a software development centre of 2 million built up sq ft area with an investment of Rs 700 crore.
•    The land will be allotted by the Karnataka Industrial Areas Development Board
•    It will also provide 13 lakh litres of water a day.
•    Wipro has also received formal approval, both from the State Government and the SEZ Board of Approval to build and operate an SEZ in Bangalore.

•    The financial detail was disclosed by the Google.
•    Synergyse was launched in 2013 to teach users how to use Google Applications.
•    With this acquisition, Synergyse will be joining the Google Apps team and help it to accelerate its mission and build Google Apps.
•    Entrepreneur Varun Malhotra has over 10 years of experience in the enterprise space.
•    Google is an American multinational technology company specializing in Internet-related services and products.
•    These include online advertising technologies, search, cloud computing, and software. Most of its profits are derived from AdWords.
•    An online advertising service that places advertising near the list of search results.
•    Google was founded by Larry Page and Sergey Brin while they were Ph.D. students at Stanford University.
•    Together, they own about 14 percent of its shares and control 56 percent of the stockholder voting power through super voting stock.
•    They incorporated Google as a privately held company on September 4, 1998.

Minister of State (I/C) for Commerce and Industry Nirmala Sitharaman on 3 April 2016 launched EXIM Analytics Dashboard to provide an easy access to detailed trade data of the country.
•    It will ensure the following:
•    The export turnover of the country, how it performs over time?
•    What are the export destinations?
•    What items are being exported?
•    Which are the ports – inland, sea or airports from which the exports are taking place?
•    This will enable small and upcoming businessmen to foray into global trade based on reliable information directly accessible through government sources.
•    Export Overview: It provides analysis of data by time period, export destinations and ports of export.
•    Import Overview: It provides analysis of data by time period, countries of Import and ports of import.
•    Balance of Trade (BOT): BOT can be analysed over time periods for different Regions, Countries and Ports.
•    The data for analysis is presented as a month’s aggregate at its lowest granularity, namely, at the level of country, commodity, port etc.
•    At present, monthly data from April 2014 till January 2016 has been provided on the analytics. Progressively additional dashboards and data for older period will be added.

Reliance Defence, subsidiary of Reliance Infrastructure Limited, the company last week received 15 industrial licenses for making a wide array of high technology equipment ranging from heavy weapons, armored vehicles, ammunition, electronic warfare systems, UAVs and directed energy weapon systems.
•    10 pertain to land systems, three for the naval systems and remaining two covering niche technologies across the defense spectrum.
•    Reliance will be competing with a host of established companies like the TATA, L&T, Baba Kalyani Group, Mahindras among others, to get orders.
•    Reliance is focusing on defence deals including Army’s plans to spend an additional Rs. 50,000 crore over next ten to fifteen years
•    This investment has to be done in different combat vehicles, air defence missile systems among others.
•    Reliance Defence also intends to address a large potential international market for combat vehicles in the Middle East, Africa and South America.\

Australian entrepreneur Craig Steven Wright on 2 May 2016 publicly identified himself as the creator of Bitcoin, digital cryptocurrency. He claimed to be the real person behind the pseudonym Satoshi Nakamoto, the creator of Bitcoin, a claim that is disputed within the Bitcoin community.
•    Wright graduated from high school in 1987 from Padua College in Brisbane.
•    He completed 18 SANS Institute courses and was the world's first person to receive GIAC certification in Compliance and Audits, and was a SANS Institute Mentor.
•    He worked in information technology for various companies, including OzEmail, K-Mart and the Australian Securities Exchange, as well as working as a security consultant for Mahindra & Mahindra.
•    He was the CEO of the technology firm Hotwire Preemptive Intelligence Group (Hotwire PE). Hotwire planned to launch Denariuz Bank, the world's first Bitcoin-based bank, though it encountered regulatory difficulties with the Australian Tax Office and failed in 2014.
•    Since the system works without a central repository or single administrator, the U.S. Treasury categorizes bitcoin as a decentralized virtual currency.

National Research Development Corporation (NRDC), under the Union Ministry of Science & Technology inked licence agreements with M/s Nabagram Resham Shilpa Unnayan Cooperative Society Ltd and M/s Dariapur Rural Development Society, Kalia Chak of West Bengal for the commercialization of Ghar Sodhon.
•    It is a user friendly and non-corrosive room disinfectant, devoid of the requirement of labour, water, electricity and spraying machines.
•    It has been developed at the Central Silk Research & Training Institute (CSRTI), Berhampore, West Bengal, a constituent Research Institute under Central Silk Board, Bengaluru, under the Union Ministry of Textiles.
•    It is gaining popularity among the silk farmers of the States of West Bengal, Odisha and Jharkhand.
With this agreement both organizations will put efforts to bring the fruits of research for awareness and betterment of the society.

On 1 May 2016 India and New Zealand signed an Air Services Agreement which will introduce direct flights between the two countries.
•    The agreement was signed in the presence of the President Pranab Mukherjee and the New Zealand Prime Minister John Key.
•    Mukherjee was on an official tour to Papua New Guinea (April 28-29, 2016) and New Zealand (April 30 to May 2, 2016).
•    The agreement will lead to easier connectivity that has halted both business travel and people-to-people contact in the past.
•    Business, Education and Tourism sector has boomed between India and New Zealand in recent years.
•    There are nearly 175000 Indians in New Zealand of which about 15000 are Indian students.
•   The two-way trade has doubled between the two countries in the last few years.
•   The two-way tourist traffic has also witnessed rise

Rahuri Municipal Council of Ahmednagar district in Maharashtra became the first Municipal Council to attain the status of integrated with digital locker for the issuance of all essential Documents.
•    Digitalization of governance was essentially meant to bring in transparency in the administration and restore peoples’ confidence in Government.
•    Department of Information Technology will also help all municipal bodies in digitalizing governance and making administration paperless.
•    The Website is integrated as an issuer and Requester with DigiLocker where the Citizen will have access to all these documents at any time.
•    They will have freedom to access them from anywhere in the world at any time.
•    The citizen of the area can now apply for the certificates like Birth, Marriage and Death Certificates online without going to Municipal Council
•    This will also ensure them the peace of mind provided by the easy security of their documents forever.

On 29 April 2016 India and Papua New Guinea signed four agreements/MoUs.These agreements have been done to boost the bilateral relations.
These MoUs were inked during the two-day visit (28 to 29 April 2016) of President Pranab Mukhrejee to Papua New Guinea.
This visit was the first ever presidential visit from India to Papua New Guinea.
• MoU between the Union Ministry of Health and Family Welfare and the Ministry of Health and HIV/AIDS of Papua New Guinea has been signed
• MoU for a USD 100 Million Credit Line was signed for development of infrastructure in the island-nation between the Government of Papua New Guinea and the Export Import Bank of India.
• MoU for cooperation in agricultural research was signed between the Indian Council of Agricultural Research and PNG University of Technology, Lae, Papua New Guinea.
Papua is one of the most culturally diverse countries in the world.
852 languages are spoken in country
• Over 7 million people lives in customary communities, which are as diverse as the languages.
• Only 18 percent of its people live in urban centres.
• It is one of the world’s least explored nations, culturally and geographically.