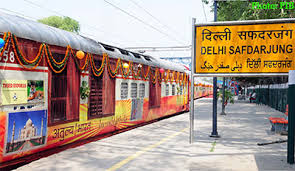 Minister of Railways Suresh Prabhakar Prabhu on 5 June 2016 flagged off the inaugural run of the Tiger Trail Circuit Train from Delhi Safdarjung Station.
The launch of this Tiger Express on World Environment Day is to highlight the significance of environment.
•    The most important objective of the train is to create and spread awareness about the wildlife in general and the tiger in particular.
•    This tourist train will be operated by Indian Railway PSU namely Indian Railway Catering and Tourism Corporation (IRCTC).
•    It is one of the most innovative tourism products ever launched by Indian Railways.
•    This is for the first time that Indian Railways have forayed into the exciting and fascinating wildlife tourism.
•    This is also the first semi-luxury train on a tourist circuit having a dining car. The objective behind it is to facilitate frequent interactions among travelers during the travel.
•    The train with 5 days/6 nights itinerary will start from Delhi Sufdarjung railway station.
•    The semi-luxury train will take the guests onboard to the world famous Bandhavgarh and Kanha National Parks in Madhya Pradesh.
•    The 5 days/6 nights itinerary of the Tiger Express includes three Tiger Safaris.