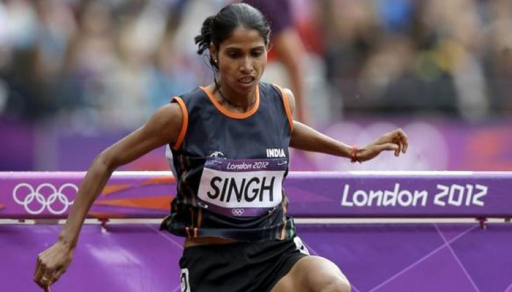 Olympics runner Sudha Singh, who created a national record in women's 3000m steeplechase at the International Association of Athletics Federations Diamond League in Shanghai last week.
•    Sudha's new record — 9:26:55secs — rewritten 15 days after Asian champion Lalita Babar's national mark in New Delhi, has intensified the friendly rivalry between the duo who train under same foreign coach Nikolai Snesraev.
•    Lalita has already qualified for the Rio Olympics in women's 3000m steeplechase.
•    For Sudha, the the IAAF Diamond League race was her first international outing on track since the 2014 Asian Games and she admitted to have butterflies in her stomach prior to the prestigious event in Shanghai, where she finished eighth in the women's 3000m steeplechase.
•    Sudha, finished fourth in her pet event at the 2014 Asian Games.
•    Lalita, who finished eighth in the World Championships in Beijing last year, said she could not run her natural race in Shanghai.