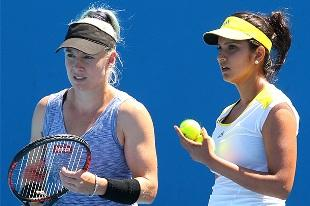 World No. 1 women's doubles team of Sania Mirza and Martina Hingis on 15 May 2016 captured the Italian Open title. The pair defeated Elena Vesnina and Ekaterina Makarova 6-1, 6(5)-7, 10-3 in the final to clinch the title.
With the win, Mirza and Hingis also captured their 14th women's doubles title together.
•    Sania Mirza is currently ranked No. 1 in the women's doubles rankings.
•    From 2003 until her retirement from singles in 2013, she was ranked by the Women's Tennis Association as India's No. 1 player, both in singles and doubles.
•    Throughout her career, she has established herself as the most successful female Indian tennis player ever.
•    Martina Hingis is a Swiss professional tennis player who is currently ranked world No. 1 in doubles by the WTA.
•    She spent a total of 209 weeks as the singles world No. 1.
•    The Italian Open is an annual tennis tournament held in Rome, Italy.
•    It is one of the most prestigious red clay tennis tournaments in the world after the French Open.
•    The tournament is played on clay courts, currently during the second week of May.
•    The event is also known as the Rome Masters and the Italian Championships.
•    Rafael Nadal has won the title a record seven times.
•    The 2015 Italian Open women’s doubles title was won by Timea Babos and Kristina Mladenovic.
•    Serene Williams is the winner of 2016 Italian Open women’s singles title.
•    Andy Murray is the winner of 2016 Italian Open men’s singles title.