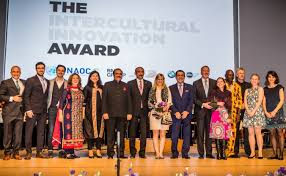 Routes 2 Roots, a Delhi-based Non-profit organization (NGO), has been awarded prestigious Inter-cultural Innovation Award 2016.
•    The award was given by United Nations Alliance of Civilizations (UNAOC) in Baku, Azerbaijan.
•    Under this programme, students from both countries connect with each other through written, audio and visual recordings that share history before partition and thus help in eliminating misunderstandings about each other’s cultures.
•    This engagement also facilitates the students to ask each other questions, thereby discovering common interests.
•    Intercultural Innovation Award: It has been instituted by a partnership between UNAOC and the BMW Group.
•    Formed with a vision of ‘connecting cultures’, constantly striving to bridge the socio-cultural distance between India and the world through music and art thereby becoming cultural diplomats to the world.
•    Ever since its inception (2004) our shows and exhibitions have traveled to more than 20 cities in India and to 12 international cities in Russia, China, United Kingdom, Sri Lanka, Pakistan and South Africa.
•    It has always been the motto of R2R to bring much needed global integrity & harmony amongst people, cultures and values across borders and especially in SAARC countries.