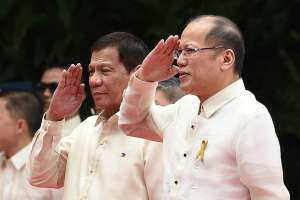 Rodrigo Duterte was sworn in as the Philippines' 16th president on 30 June 2016 inside the Malacanang presidential palace in Manila. He will have a six-year term.
Firebrand leader Duterte’s anti-crime programme includes plans to reintroduce the death penalty, issuing shoot-to-kill orders to the security services and offering them bounties for the bodies of drug dealers. He has also called on people to kill suspected criminals.
•    He was born in 1945 into a political family with a modest background.
•    He has served the southern city of Davao, as its mayor for 22 years.
•    He is also known as “Dirty Harry” and often compared to the US presidential candidate Donald Trump.
•    He captured the public imagination after promising to improve security by killing 100000 suspected criminals.
•    As the mayor of Davao he gained popularity across the archipelago, where crime rates dropped drastically under his leadership.
•    He has also served as vice-mayor and as congressman for the city.
•    He is a lawyer by profession is nicknamed as ‘Digong’, ‘The Punisher’.