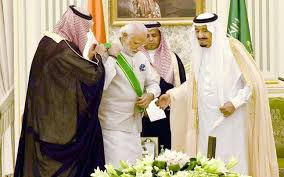 Prime Minister Narendra Modi was conferred with Amir Amanullah Khan Award, the country's highest civilian honour of Afghanistan.
•    He was awarded the honour by Afghan President Ashraf Ghani.
•    During his 25 minute-long speech after inaugurating the dam, PM Modi also invoked Chisht-born Sufi saint Khwaja Moinuddin Chishti who settled down in Ajmer and is venerated by thousands of people visiting his shrine.
•    At the close of the speech, the prime minister also wished the people of Afghanistan and all Muslims across the world for the Holy Month of Ramzan.
•    Modi is the first Indian and is among a handful of foreign leaders to receive the award.
•    The award is named after the Afghan national hero Amanullah Khan who championed the cause of Afghanistan’s freedom. He was the ruler of the Emirate of Afghanistan from 1919-1929.