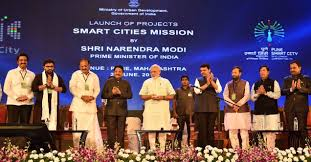 The Prime Minister, Shri Narendra Modi today attended the first anniversary celebration of the Smart Cities Mission and AMRUT, in Pune.
•    Speaking on the occasion, the Prime Minister said that a fresh trend is now noticed where cities are moving forward to compete on the path of development.
•    He said there is a positive atmosphere of competing on development works through the spirit of Jan Bhaagidaari. He emphasized that people in the cities must decide about the development of their urban spaces, adding that these decisions cannot be taken in Delhi.
•    He said that the spirit of participative governance is vital.
•    The Prime Minister said that the days when urbanization was seen as a problem are now over; it is now seen as an opportunity.
•    Shri Narendra Modi said that cities are growth centres which have the capacity to mitigate the problems faced by the people.
•    The Prime Minister also stressed on the need for cities to focus on solid waste management.
•    Earlier, the Chief Ministers of Andhra Pradesh, Odisha and Rajasthan, joined the event through live video conferencing from Visakhapatnam, Bhubaneswar and Jaipur respectively.
•    They shared their views with the gathering. The Prime Minister also inaugurated the Smart Net Portal, and Smart City Projects of Pune. He launched the “Make Your City SMART” Contest.