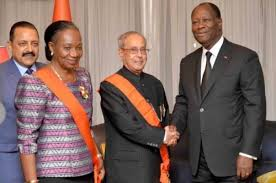 President Pranab Mukherjee on 14 June 2016 was accorded with Grand Cross National Order of the Republic of Cote D'Ivoirie in a simple ceremony at the President's Palace in Abidjan. It is the highest civilian award of Ivory Coast.
•    He received many honorary degrees but, it is the first such honour accorded to him by a country.
•    The President was honoured during his two days visit to the Country from 14 June to 15 June 2016.
•    It was the first visit of any Indian President to Ivory Coast. In fact, it is the first ever high level visit from India to Ivory Coast.
•    Both the countries signed headquarters agreement for re-establishment of Exim bank regional head quarters in the Ivory Coast.
•    The Supreme Commander of the Indian Armed Forces highlighted the common concerns of both the countries to combat international terrorism and other key issues including disarmament, climate change and sustainable development.
•    The Head of the State reiterated the commitment of India towards the South-South Cooperation through developmental assistance and sharing resources for the development in Africa.
•    He appreciated the naming of an information technology park in Abidjan after Mahatma Gandhi calling him as a true son of India as well as Africa.
•    The President also promised that India will remain a steadfast partner in assisting Cote D'Ivoirie (Ivory Coast) in its economic development and growth and trade between the two nations is expected to touch 1 billion US dollars in few years.