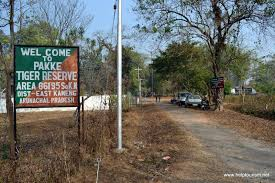 Pakke Tiger Reserve on 22 May 2016 received the 'India Biodiversity Award 2016' in one of its four categories in Mumbai.
•    The Hornbill Nest Adoption Programme of the Pakke Tiger Reserve was awarded the prize under Conservation of threatened species category.
•    Besides this, Hong Niitii, Lower Subansiri was awarded under category IV Biodiversity Management Committee (BMC) award.
•    Hornbill Nest Adoption Programme It is a collaboration of Ghora-Aabhe Society, Nature Conservation Foundation and the State Forest Departments.
•    Under this programme, urban citizens contribute money to protect hornbill nests around Pakke Tiger Reserve.
•    It is a major step towards conservation of four hornbill species that are found in the adjoining areas of the Tiger Reserve.
•    India Biodiversity Awards are joint initiative of Union Environment, Forest and Climate Change Ministry, National Biodiversity Authority (NBA) and United Nations Development programme (UNDP).
•    It recognizes the contribution of the stakeholders towards the biodiversity conservation.