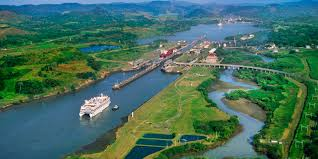 Newly renovated and expanded Panama Canal reopened for bigger business on 26 June 2016.
The first ship to cross the canal using the third set of locks was a modern New Panamax vessel, the Chinese-owned container ship Cosco Shipping Panama.
The 5.25 billion US dollar project was unveiled nearly two years late after construction delays, labour strife and apparent cost overruns.
The project is expected to create demand for ports to handle New Panamax ships.
•    The Panama Canal expansion project is also called as the Third Set of Locks Project.
•    The project was formally proposed by the then-Panamanian President Martín Torrijos on 24 April 2006.
•    A national referendum approved the proposal by a 76.8 percent majority on 22 October 2006.
•    The project formally began in 2007.
•    The project has built two new sets of locks, one each on the Atlantic and Pacific sides, and excavated new channels to the new locks.
•    It also widened and deepened existing channels.
•    It also raised the maximum operating water level of Gatun Lake.
•    The expansion doubled the Canal’s capacity, and has a direct impact on economies of scale and international maritime trade.
•    The project doubled the capacity of the Panama Canal by:
•    Adding a new lane of traffic allowing for a larger number of ships
(b) Increasing the width and depth of the lanes and locks allowing larger ships to pass. The new larger size of ships is called New Panamax. They are about one and a half times the previous Panamax size and can carry over twice as much cargo.
•    The Panama Canal is a man-made 48-mile waterway in Panama.
•    It connects the Atlantic Ocean with the Pacific Ocean.
•    The canal cuts across the Isthmus of Panama.
•    It is a key conduit for international maritime trade.
•    France began work on the canal in 1881, but stopped due to engineering problems and a high worker mortality rate.
•    The United States took over the project in 1904, and opened the canal on 15 August 1914.
•    The Panama Canal shortcut greatly reduced the time for ships to travel between the Atlantic and Pacific Oceans.
•    Colombia, France and later the United States controlled the territory surrounding the canal during construction.
•    The US continued to control the canal and surrounding Panama Canal Zone until the 1977 Torrijos–Carter Treaties provided for handover to Panama.
•    In 1999, the canal was taken over by the Panamanian government. It is now managed and operated by the government-owned Panama Canal Authority.
•    The American Society of Civil Engineers has called the Panama Canal one of the seven wonders of the modern world.