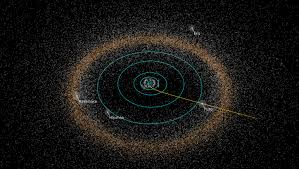 The National Aeronautics and Space Administration (NASA) in the first week of July 2016 gave its approval to the New Horizons mission to investigate a mysterious object deep in the Kuiper Belt.
The mission will explore the mysterious object known as 2014 MU69.
It is expected that the New Horizons will reach 2014 MU69 on 31 December 2018 or 1 January 2019.
•    2014 MU69 is an ancient object considered one of the early building blocks of the solar system.
•    It was selected as New Horizons' target in August 2015.
•    After four course changes in October and November 2015, New Horizons is on course toward 2014 MU69.
•    2014 MU69 was initially called PT1 and 1110113Y by the New Horizons and Hubble teams respectively.
•    It was discovered on 26 June 2014 using the Hubble Space Telescope during a preliminary survey to find a suitable Kuiper belt object for the New Horizons probe to flyby.
•    2014 MU69 is the first object to be targeted for a flyby that was discovered after the spacecraft was launched.
•    New Horizons is an interplanetary space probe that was launched as a part of NASA's New Frontiers program.
•    It is engineered by the Johns Hopkins University Applied Physics Laboratory (APL) and the Southwest Research Institute (SwRI), with a team led by S. Alan Stern.
•    It was launched with the primary mission to perform a flyby study of the Pluto system. Its secondary mission is to fly by and study one or more other Kuiper belt objects (KBOs).
•    New Horizons was launched on 19 January 2006 from Cape Canaveral Air Force Station.
•    It was launched directly into an Earth-and-solar escape trajectory with a speed of about 16.26 kilometers per second.
•    On 14 July 2015, it flew 12500 km above the surface of Pluto, making it the first spacecraft to explore the dwarf planet.