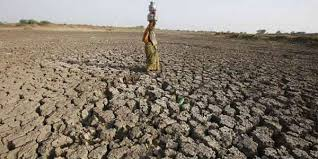 On 12 May 2016 Maharashtra government declared drought in over 29000 villages of the state, most of them in parched Marathwada and Vidarbha regions.
•    The state is implementing various schemes and taking measures to mitigate the water scarcity in drought-hit areas, and more particularly in Marathwada and Vidarbha regions.
•    The villages that have now been declared as affected by drought were already receiving benefits from the government and that the Drought Manual provided only for the word drought-like.
•    On 7 May 2016, the Chief Minister Devendra Fadnavis met Prime Minister Narendra Modi and requested 10000 crore rupees as relief for the parched state.
•    7500 crore rupee was to be spent on completing irrigation projects in Marathwada and Vidarbha over the next three years.
•    Maharashtra is a state in the western region of India and is India's third-largest state by area and is also the world's second-most populous sub-national entity.
•    It has over 110 million inhabitants and its capital, Mumbai, has a population of approximately 18 million.
•    Nagpur is Maharashtra's second capital as well as winter capital