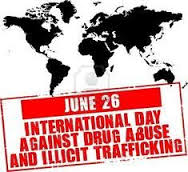 International Day against Drug Abuse and Illicit Trafficking was observed on 26 June 2016. The day was observed with theme Listen First.
•    2016 theme Listen First is an initiative to increase support for prevention of drug use that is based on science and is thus an effective investment in the well-being of children and youth, their families and their communities.
•    On this day, the United Nations Office of Drugs and Crime (UNODC) also released the World Drug Report 2016.
•    On 7 December 1987, United Nations general Assembly (UNGA) via resolution 42/112 decided to observe 26 June as the International Day against Drug Abuse and Illicit Trafficking. It was decided to observe the day as an expression of its determination to strengthen action and cooperation to achieve the goal of an international society free of drug abuse.
•    This resolution recommended further action with regard to the report and conclusions of the 1987 International Conference on Drug Abuse and Illicit Trafficking.
•    Earlier in April 2016, the United Nations held a Special Session (UNGASS) on drugs. This session marked an important milestone in achieving the goals set in the policy document of 2009 "Political Declaration and Plan of Action on International Cooperation towards an Integrated and Balanced Strategy to Counter the World Drug Problem.
•    The plan defined action to be taken by Member States as well as goals to be achieved by 2019.
•    Measures to address demand and supply reduction and to improve access to controlled medicines while preventing diversion.
•    It also cover the areas of human rights, youth, children, women and communities; emerging challenges, including new psychoactive substances; strengthening international cooperation; and alternative development.
•    The text puts new emphasis on proportionate national sentencing policies and practices for drug-related offences, and features a strong focus on prevention and treatment.
•    On this day, the Punjab Frontier of Border Security Force organised a Cycle Rally comprising 65 BSF personnel led by Deputy Inspector General (Operations) BSF Punjab Frontier Mohan Lal from its Jalandhar Headquarters.
•    This Cycle Rally was aimed at spreading the message of utmost dedication to national Security, awareness against drugs and to spread the message of physical fitness amongst the citizens and particularly amongst the youth.