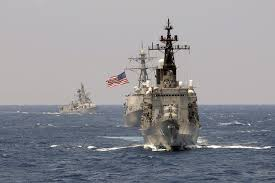 India, Japan and the US began their marine war games, Malabar Exercise, near Okinawa Island.
•    In 2013, China unilaterally established an Aircraft Defense Identification Zone in the East China Sea (ECS ADIZ) triggering protest from Japan, USA, European Union and Australia.
•    The exercise, the annually held Malabar, has been recently expanded from a bilateral comprising India and US to a trilateral exercise to include Japan. •    Over 100 assets - warships, fighters and surveillance aircrafts - will be participating in this year's Malabar, indicating the size and intent of the exercise.
•    India is fielding its top of the line Indian-made stealth frigates INS Sahyadri and INS Satpura, Indian fleet tanker INS Shakti and INS Kirch - a missile corvette.
•    One key elements of the exercise is anti-submarine warfare where three forces will create a scenario of hunting down Chinese submarines.
•    China's aggressive stand in the East and South China Sea have raised concern globally.