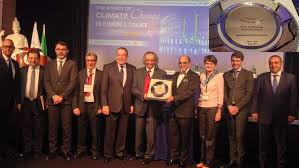 Raghavan Seetharaman, Qatar-based Indian banker, on 30 May 2016 was awarded the Green Economy Visionary award.
•    Seetharaman was honoured for his contribution in environment-friendly activities and for promoting green economy for nearly two decades.
•    The banker was presented with the award at the 2016 Union of Arab Banks International Banking Summit held in Rome. Mohammed Jarrah Al-Sabah, Chairman of Union of Arab Banks, presented the award to Seetharaman.
•    Raghavan Seetharaman is the Group CEO of Doha Bank, which is one of the largest commercial banks in Qatar.
•    In 2015, business magazine Forbes ranked Seetharaman 6th in the Forbes’ Top Indian Leaders in the Arab World 2015 list.
•    He started his career at PricewaterhouseCoopers (PwC), one of the four largest professional services networks.
•    In 2002, he became Deputy CEO for Doha Bank.
•    He was named CEO in September 2007.
•    He graduated with a degree in commerce from the University of Madras and then became a chartered accountant.
•    He also earned a double doctorate, first in Global Governance from the European University in 2013 and the second in Green Banking and Sustainability from Sri Sri University in 2015.
•    He also received an honorary degree (Doctorate of Laws) from the Washington College.