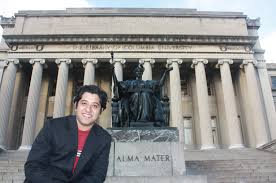 An Indian-American scientist Arnab De has received the prestigious Springer Theses Award in recognition for his outstanding research in which he developed transgenic mice to study a critical tumor-suppressor called A20.

•    Arnab De's thesis was nominated by New York's Columbia University.
•    Before this, De, who has also developed peptide-based prod rugs as therapeutics for diabetes, had received the Young Investigator Award at the American Peptide Symposium.
•    The thesis prize is awarded by Springer, a leading global publisher of renowned scientific journals and books, to recognize outstanding PhD research.
•    Winners also get a cash prize of 500 Euros.
•    The research work was highlighted by the European Molecular Biology Organization (EMBO) Reports.
•    Only research considered to be of 'fundamental relevance to a general readership' is chosen to be highlighted by EMBO.
•    Internationally top-ranked research institutes select their best thesis annually for publication in this series. Nominated and endorsed by two recognized specialists, each thesis is chosen for its scientific excellence and impact on research.