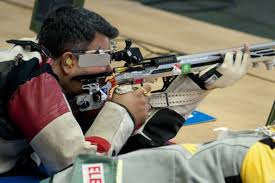 Indian shooters ended their journey at the International Shooting Sport Federation Junior World Cup in Suhl, Germany at a creditable fourth position.
•    India ended this journey with three gold, four silver and three bronze.
•    From April 29-May 5 a total of 585 junior athletes from 48 countries participated but only 24 nations made it to the medals table
•    Tally was topped by Italy with seven gold, four silver and one bronze.
•    Russia stood second with five gold, six silver and nine bronze
•    Germany came third with five gold, three silver and three bronze medals.
•    For India, Rituraj Singh won two gold medals in both the individual and team events of the men's 25m Standard Pistol.
•    Shivam Shukla also won a gold and a silver.
•    Arjun Das won a yellow metal and a bronze for Team India.
•    Yashaswini Singh Deswal won two silver medals, both in the individual and team sections of the 10m Air Pistol event.