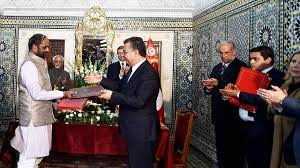 On 2 June 2016 India and Tunisia signed Memorandum of Understanding (MoU) for co-operation in Information Technology and promotion of traditional handicrafts.
•    The MoUs were signed after the delegation level talks between the two countries in the presence of Vice President Mohammad Hamid Ansari and Tunisian Prime Minister Habib Essid in Tunis.
•    After the meet, the two nations also released a joint press statement saying that the entire gamut of bilateral as well as global issues was discussed.
•    The two sides had discussion on bilateral ties focused on economic partnership and adding new areas of collaboration in IT and education.
•    The two sides also decided to enhance co-operation in counter terrorism.
•    Apart from this, Ansari also appreciated Tunisia's support to India's candidature to the expanded United Nations Security Council.
•    He also invited 350 Tunisian citizens to India for training in different institutes over the next five years.
•    He said that the meeting of the India-Tunisia Joint Committee will be held later in 2016 and focus of the meeting will be promotion of tourism.