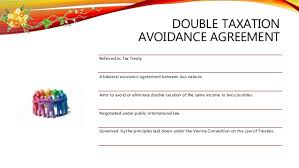 India and Central European country Slovenia signed a protocol in second week on May 2016 to amend an existing double taxation avoidance treaty in Ljubljana. This new agreement will curb tax avoidance and tax evasion.
•    The protocol was signed by Indian ambassador to Slovenia Sarvajit Chakravarti, and Slovenian Finance Minister Dusan Mramor on behalf of Slovenia.
•    This agreement will widen the scope of the existing framework of exchange of tax related information.
•    The framework is likely to help curb tax evasion and tax avoidance between the two countries.
•    It will also enable mutual assistance in collection of taxes.
•    Slovenia, formerly a part of erstwhile Yugoslavia, attained Independence in 1991. India recognized Slovenia on 11 May 1992.
•    Soon after recognition, the then Foreign Minister of Slovenia Dimitrij Rupel visited India on 18 May 1992.
•    Slovenia opened its resident mission in New Delhi on 1 August 2002. While, India opened its resident Mission in Ljubljana in February 2007.