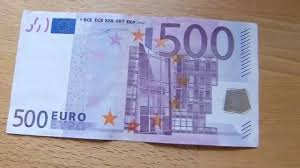 On 4 May 2016 The European Central Bank (ECB) announced to permanently stop producing the 500 euro banknote by the end of 2018.
•    500 euro banknote, like the other denominations of euro banknotes, will always retain its value and can be exchanged at the national central banks of the Euro system.
•    On 20 April 2010, money exchange offices in the United Kingdom stopped selling 500 euro notes because of money laundering.
•    The five hundred euro note is the highest-value euro banknote.
•    It is one of the highest value circulating banknotes in the world, worth around 558 USD, 3634 Chinese Yuan, 62700 Japanese Yen, 544 Swiss Franc or 395 Pound sterling.
•    The note is used in the 23 countries.
•    It is the largest note measuring 160 × 82 mm and has a purple colour scheme.
•    The five hundred euro note contains several security features such as watermarks, invisible ink, holograms and microprinting.