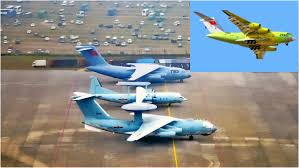 China inducted its largest indigenously-built transport aircraft named as Y-20, marking a crucial step in its Air Force history for improving its strategic power projection capability.
•    It is also considered as a breakthrough for Chinese defence sector especially in military aviation technology which will allow the world’s largest force to transport cargo and troops over long distances in diverse weather conditions.
•    The indigenously designed and developed Y-20 officially joined the PLA Air Force in Chengdu.
•    It is ideal for transporting cargo and personnel over long distances in diverse weather conditions. It has a maximum take-off weight of 200 tonnes.
•    The plane is comparable to the Russian-made IL-76 and US made C-17.
•    It is more advance than the IL-476.
•    Its induction will make easier for Chinese PLA to deploy troops, enable military to act more promptly and respond to emergencies in a better manner
•    The Y-20 had undergone its maiden flight in January 2013 and since then it had undergone trials runs, including in the rugged Tibetan terrain,
•    It had made its debut at the 10th China International Aviation and Aerospace Exhibition in November 2014.