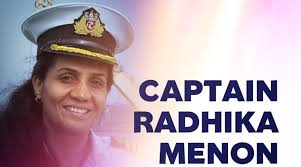 Radhika Menon will become the first woman in the world to receive the Award for Exceptional Bravery at Sea for 2016, from the International Maritime Organization.
•    She will be awarded for saving the lives of seven fishermen, whose hopes of survival were all but over.
•    The Awards ceremony is set to take place at IMO Headquarters in London, on 21 November.
•    The annual Award was established by IMO to provide international recognition for those who, at the risk of losing their own life and perform acts of exceptional bravery.
•    Captain Menon was nominated by the Government of India, for the rescue of all seven fishermen from the fishing boat Durgamma, which was a drift following engine failure and loss of anchor in severe weather.
•    Food and water had been washed away and they were surviving on ice from the cold storage facility.
•    The IMO Council, meeting for its 116th session in London, endorsed the decision of a Panel of Judges that Captain Menon displayed great determination and courage in leading the difficult rescue operation in the Bay of Bengal in June last year.